There has not been much subject matter lately, and may not be a lot in the coming weeks, but yesterday I was going through some old stuff (again!).  I came across a newspaper clipping about my grandfather and the subject of dowsing.
Also known as divining, water dowsing, or water witching, it is something of a mystery why it works.  It has been known for hundreds of years.

My grandfather was one of those with the 'gift' and could find any underground watercourse or buried pipes.  Farmers in the local area would call upon him, after they unsuccessfully dug for water wells on their property.  It would not take long for grandpa to find a spot.  "Drill here" he would say.  He was correct every time. 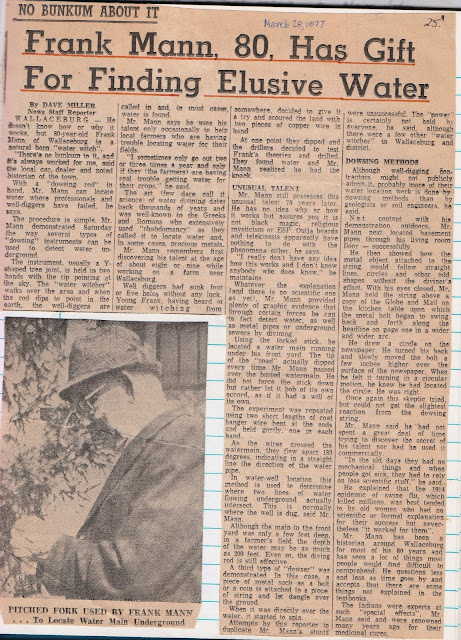 There are different methods of dowsing.  One way is to take a "Y" shaped branch (or fork) and grasp it with the point out from you.  Witch Hazel was often the preferred species of tree to use.  When one was directly over water, the stick would quickly point down.

Another "tool" is to take two L-shaped wires and grasp one loosely in each hand pointing outward.  When one walks over a watercourse (or water pipe), they swing outwards parallel to the watercourse.

I remember watching my grandpa search things out.  We put him to the test once, and he found buried pipes, and even something else we did not know about!

I have tried them out and they seem to work!
Not everyone has the gift though.

If any one of you are fans of The Curse of Oak Island, there is reference to dowsing when they show Dan Blankenship doing it.  He had the 'gift', but said that he had no explanation for it.
Some people think it is bunkum, but it actually works!

The article above may be difficult to read, but there are other tools of the trade.  One can tie a weight to a string and hold it still.  It will start swinging parallel to a pipe or line.
If it is above a circle, it will start swinging in a circlular fashion.
I watched grandpa in action once demonstate these things after he drew a line and circle on a piece of paper.

Even further, one could tell the gender of a child in a womb.  If the weight went in a circle it was female, and when in a line, it was a male.  Believe it or not!

Grandpa died in 1993 just short of his 97th birthday, but this subject brought back some interesting memories.