In the last week or so, some maintenance has been done at Peers Wetland, just outside of Wallaceburg.  With the high water levels the last two seasons, things became a mess there.  Most of the trail was unwalkable and vegetation growth was getting thick.  It was too wet in some spots, and the other areas were heavily grown in with willows, thistles, etc. since equipment could not be brought in.

The dike has been cleared out and shored up in spots.  Perhaps too much vegetation was removed!  There will be fewer birds flitting about along the dike as there is no place to hide.  No doubt in time it will fill in though. 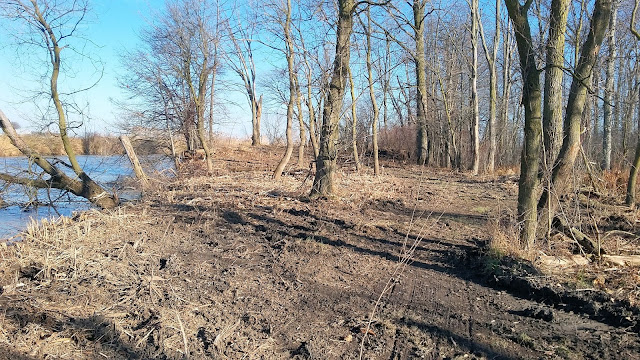 I took a walk yesterday to check things out, as the above photo shows.

This young accipiter was also checking things out. 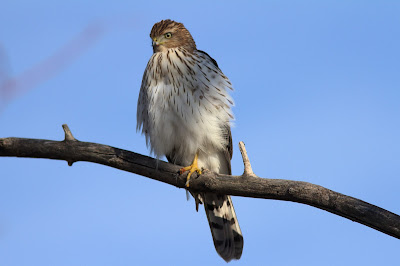 Some maintenance was certainly due.  As well, the old clubhouse is finally gone.  It was due to be torn down, but some weeks ago it was torched!  Less to haul away.

A few years ago, I wrote a blog post about Peers Wetland (edited):

A nice spot to visit close to home is Peers Wetland beside Kimball Road on the east side of town.  I mention this place often, as I go for walks here several times a week.  The land was originally owned by local farmer Francis Peers.  It is now under ownership of St. Clair Conservation. 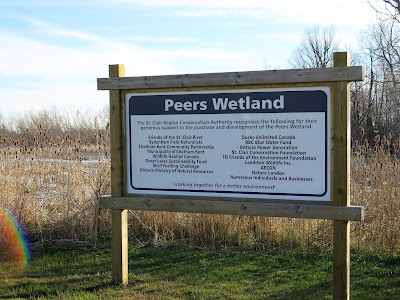 A trail goes around the perimeter, bordering Otter Creek then parallel to Kimball Road.  The woodlot section was actually a little island surrounded by marsh, but is connected to high ground via the dike. This was always known a Chicken Island.  Local people went skating here in the winter, including myself.  However, in early 1990's vegetation began to fill in the open area.  Recently, dike work has maintained the water level and more open water is seen.

It is a good spot to see a variety of birds whether it be marsh birds, waterbirds, passerines, etc.  It is a good migrant trap during migration periods and you never know what may be around. 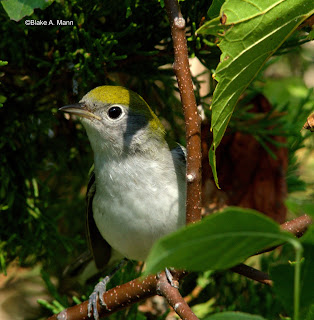 A variety of plant life attracts insects such as butterflies.

One day I saw a Buckeye, which was actually the first one I have seen at this location! 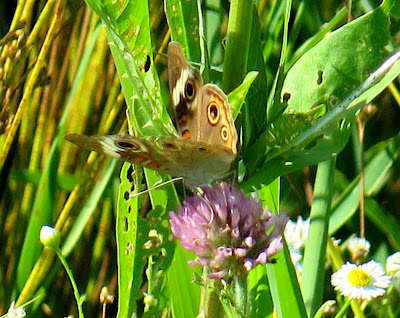 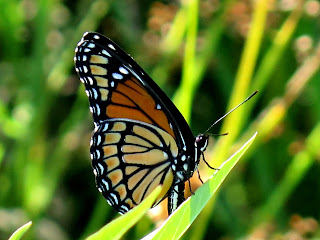 Once I saw a Milbert's Tortoiseshell which was rather unique for here. 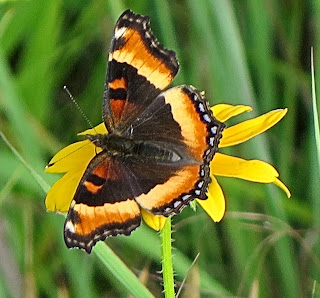 Sometimes, Striped and Banded Hairstreaks can be spotted along the dike.

A few years ago, the Sydenham Field Naturalists erected a viewing platform. 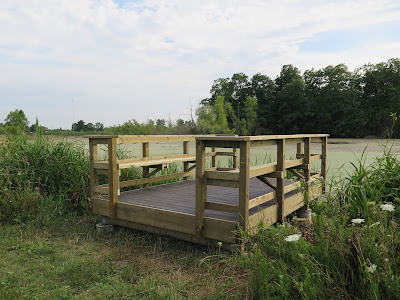 Although vertically-challenged, it is a nice place to sit and watch. 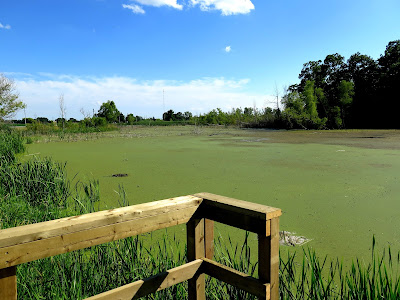 Black-crowned Night-Herons tend to hang out around the wetland in good numbers.  Some days I have counted at least ten. 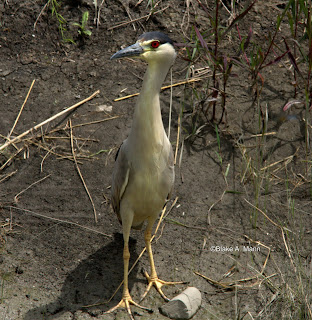 Once, I rounded a corner and came across an American Bittern on the trail! 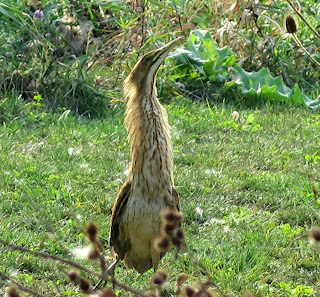 Green Herons are always a regular resident, while both Soran and Virginia Rails can be present.

It is a good stopover for migrant ducks, and a good variety have been recorded.  Mallard and Wood Ducks are summer residents.

One summer, a family of Common Gallinules took up residence. 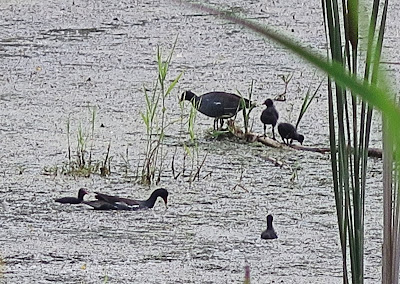 A Motus Wildlife Tracking Station is located at Peers. 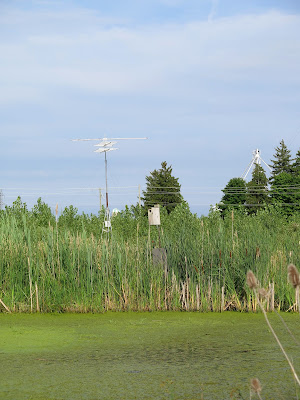 Peers Wetland will always be a frequent stop of mine! 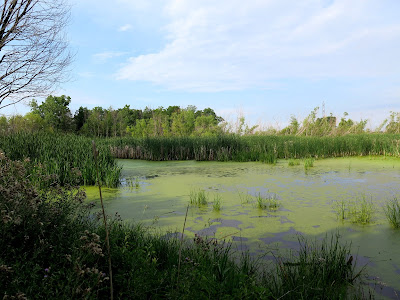 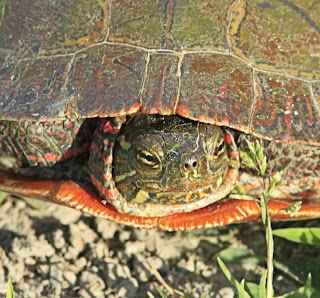 On Friday, I was in the mood for lots of driving.  I started at Rondeau under very calm conditions.  Since lakewatches have been a bust lately, I reversed things and started birding in the campground.  As soon as I got out of the car, a flock of redpolls flew over.  They are in big numbers everywhere right now, and at every stop one is bound to find some.

There was nothing spectacular in the campground--actually rather quiet--but one has to look anyway.  Not even Yellow-rumped Warblers are around it seems.

I checked out south point as well.  The lake was very calm, and several loons (both common and red-throated were seen). 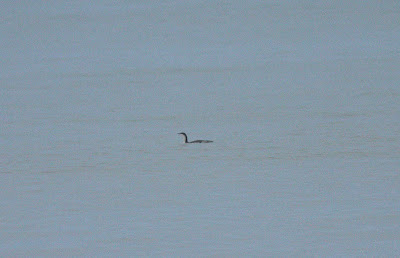 Waxwings have been scarce lately, but I did find some of the Cedar variety on south point.  There are only a few records of Bohemian in the Rondeau area, so one can only hope for those. 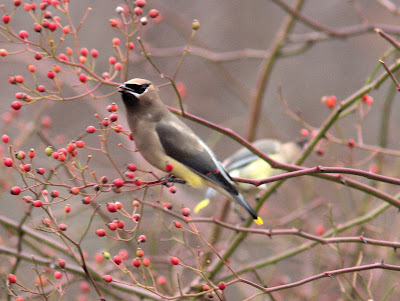 Carolina Wrens must have had a decent year, as many of those were singing thoughout the park and elsewhere. 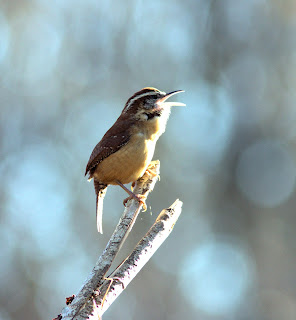 I started heading east after Rondeau, taking in the sights. 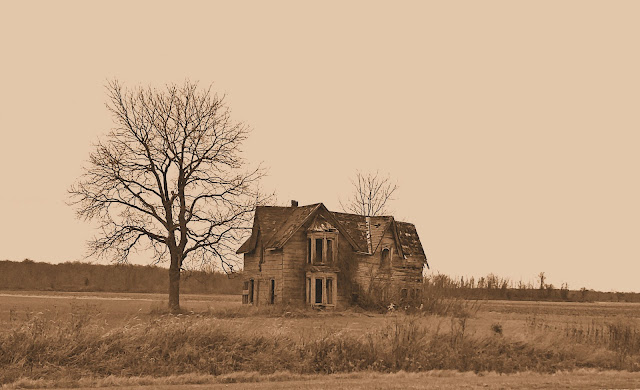 I wanted to visit  (for whatever reason!) John E. Pearce Provincial Park south of Wallacetown.  The pine plantation often reveals owls, and I found one Long-eared. A couple of years ago, a Barred Owl set up shop! 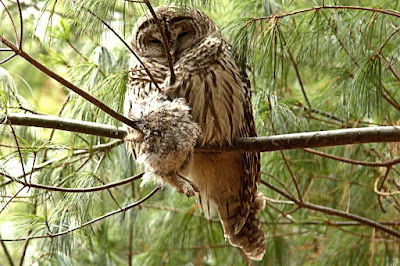 Note remains of another owl!

Heading back northwest, I stopped by Wardsville Woods. Redpolls were here as well, but no waxwings.

Afterwards, I headed northerly through Skunk's Misery, then into east Lambton.  A couple days previous, a White-winged Dove was seen along Shiloh Line, as reported by Lori Clancy.  I did manage to find it.  It is Lambton's second record, the previous just last year!  One needs to check those Mourning Doves more closely (saw lots of them on my tour)!

It was one of the dullest days, especially in the afternoon, I have ever seen.  Hence not much photo opportunities.

There were several flocks of redpolls along the way, among other birds, but at least an interesting day.

Today, the sun was out much to everyone's relief.  The past week was rather dull weatherwise, but most November days are always like that.

I headed down to Point Pelee....just because!  Not much was moving on the lake as I checked out the Tip first thing.

Near the Tip, a late Turkey Vulture was soaking up some sun. 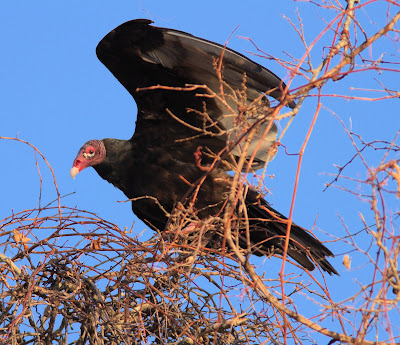 Redpolls were flying over the park too.  Not a common species in the park!

I did quite a bit of walking, but did not find anything to write home about.  Notable, was a late Autumn Meadowhawk along Ander's Footpath. 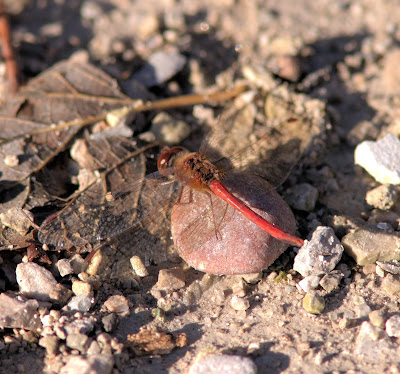 Snowy Owls are finally starting to show up, and I saw my first of season northwest of Port Alma on my way home.  No photo though as it was in a bad position.....again. 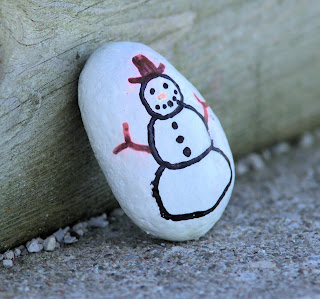