Things are certainly on the move and I was out Friday and Saturday to take advantage.  Friday seemed to be a good day to go to Rondeau where I met up with Steve Charbonneau on the Great Kiskadee anniversary (it was Friday September 7, 2018).
A short lakewatch at dog beach proved quiet.  Better days are ahead and we are anxious for a good lakewatch there soon!
We then moved to south point trail where we found lots of birds from the get-go. A good variety of warblers and vireos were working the trees. 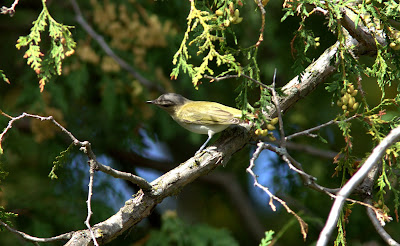 Even Swainson's Thrushes were plentiful.

Highlight was a Dickcissel!  At one point I got a glimpse of  bird that I remarked looked "almost like a Dickcissel".  Sure enough, we saw it fly up and perch! 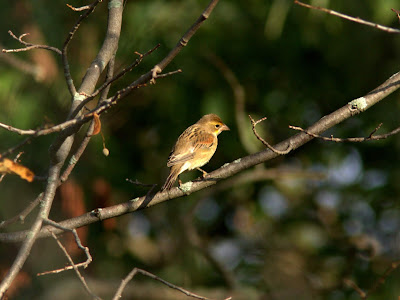 It is rather late for the species.  They arrive late in the spring, do their business and leave early, so they are not around very long!

Our next stop was at a location to look for a family of King Rails which were found some time earlier in the week.  Some patience was required, but at least one came out for a peek. 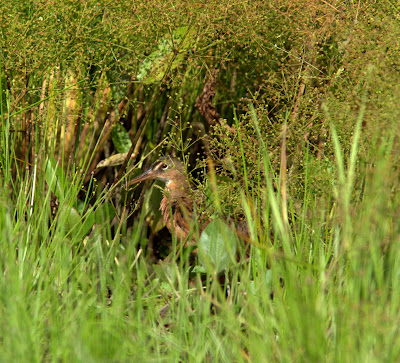 Luckily, it eventually came out in full view.  I managed to get a good photo (hence the new header photo for this blog). 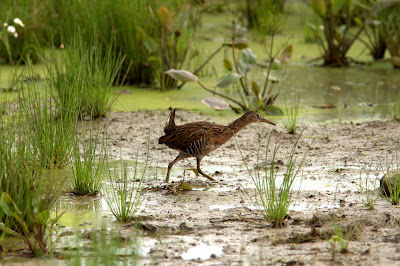 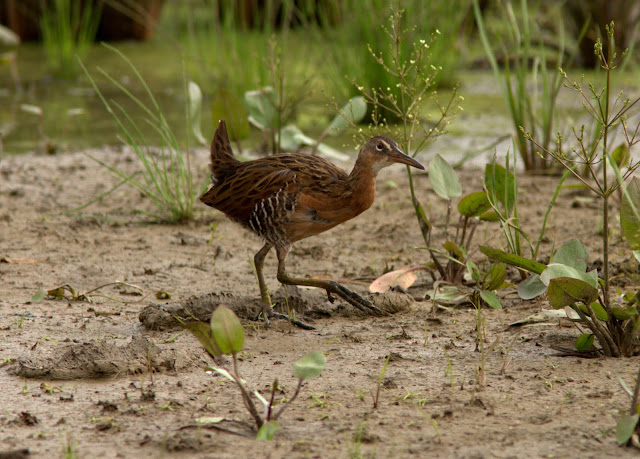 Note the large 'mudhooks' which allow them to get around in the marshes.  We could see tracks in the nearby mud. 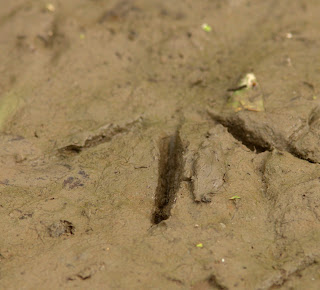 King Rails are considered a threatened bird in Ontario and are often difficult to find.  When listed on eBird, the entry will not appear to the public for good reason.
This year, perhaps, they may have had a good nesting year with all the high water.

It is not often one gets to see a King Rail. Ironically, we had seen one this past May in the Rondeau marsh.  So, it was not a new one for the year list!  I have seen them in the past, such as a pair on Walpole Island during the atlas data-gathering period.

The flooded field at McLean Conservation Lands is good for birds right now.  We stopped by to venture out on to the mudflat to see what was around.  Earlier in the summer, many shorebirds were there but difficult to get a handle on. 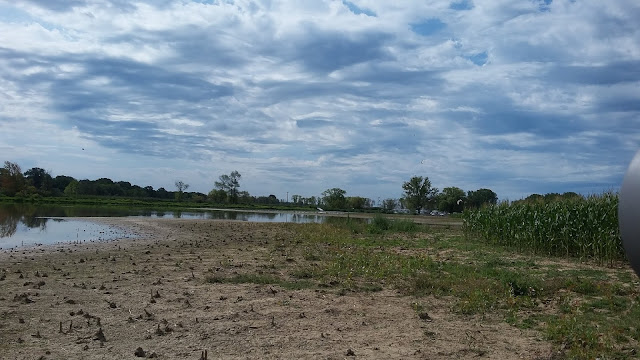 Now that the water has receded somewhat, one can walk around McLean's.  We did not see much variety on Friday though.  Something good will certainly show in the near future!

Today, Saturday, I took made my weekly visit to Forest lagoons.  It felt like a weekend as it was overcast when I drove up, and eventually a brief rain ensued shortly after I arrived.  Eventually the sun came out though.

Upon arrival, there were few shorebirds to be seen.  I knew something was afoot.  A Willet was in view for a short period of time, but then all the birds scattered.  The culprit was a Merlin.  It has been present for at least a week, creating headaches for visiting birders, not to mention for the shorebirds.

It took some time, but eventually many birds came back to settle in.  Highlight was a Red Knot.  It would better be called a Gray Knot this time of year though!  Like most birds, it was too distant for a decent photo.  However, good scope views were obtained. 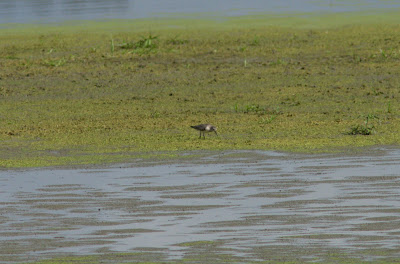 Some Sarnia birders present were knot disappointed in seeing this "moonbird". 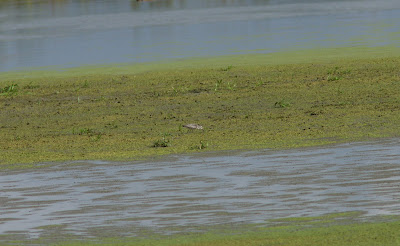 I refer to it as moonbird since a book came out a number of years ago called Moonbird.  It is the story of a Red Knot that returned to southern South America for several years in a row.  A long journey each year!

While observing this bird, I realized it was a new Lambton bird for me.  Oddly enough, I had never recorded one in Lambton till now!

Four Baird's Sandpipers were still present today.  They have been around for over a week. 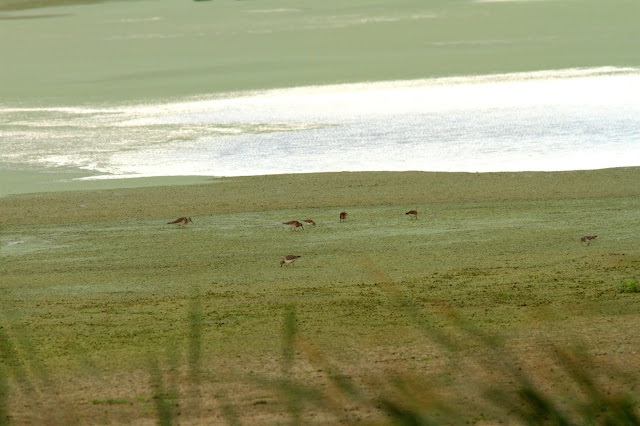 Not sure what I was photographing here: 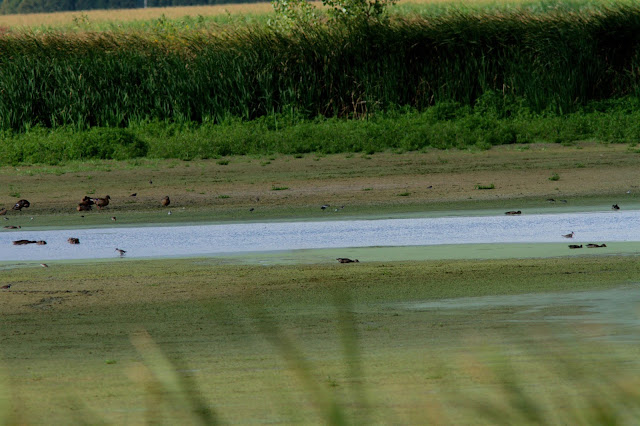 Here is my eBird list for Forest today:
https://ebird.org/view/checklist/S59577036

On the way home I stopped by Wilkesport.  An American Snout was a surprise at Nicholl's Memorial Forest. No Hackberry trees near here! 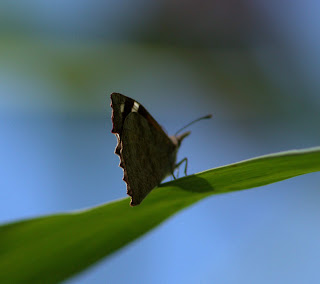 At home, I even saw one in the yard.  It was a new yard butterfly (I think)!  Obviously they were on the move today.
A Common Checkered-Skipper was among those seen in the yard today as well. 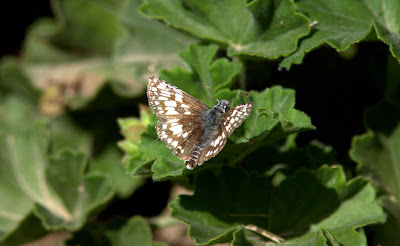