As the wacky weather continues, I have been doing some wandering.  I would like to go farther afield some weekend, but every single weekend the weather goes inot the dumps.  I would rather have sunny weather for travelling, so I guess I should schedule for a weekday!

Friday, I decided to check out Fanshawe CA at the NE corner of London.  Seeds are always put out at the start of Tamarack trail and that attracts many birds. 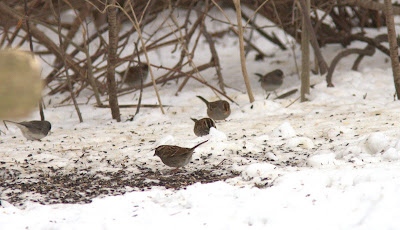 A year ago, we had the Evening Grosbeak there as a highlight.  Nothing like that this winter, but a Chipping Sparrow decided stick around.  I saw it for a FOY (first of year), among other birds as soon as I got out of the car. 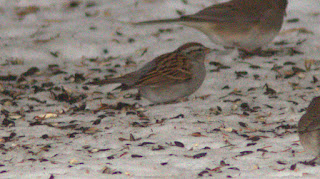 A White-crowned Sparrow was also in the mix, along with numerous American Tree Sparrows and Dark-eyed Juncos. 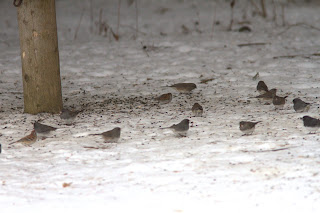 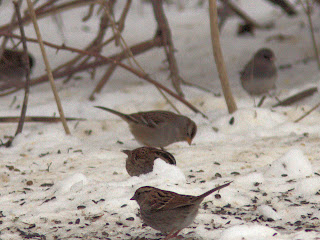 The Black-capped Chickadees are quite used to people and they will even attempt to land on you.  So, you better have some sunflower seeds on hand! 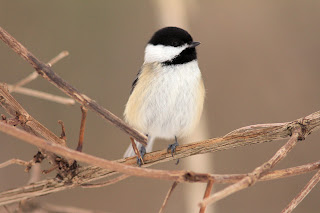 I walked around a bit after observing the "feeder" birds, including through the Tamarack tree area.  I was reminded of the Black-backed Woodpecker that was somewhere around these parts back in the early 1990's.


At least the rain held off by this time, but as I headed back west of London, it started up, signalling the start of the weekend.

I had the intention of touring around Skunk's Misery and north of Newbury looking for raptors, especially Golden Eagles, but it was too miserable to do much.  I did, however, encounter one eagle in the Misery, FOY.

By this time, fuel was getting low (lol), so I stopped by Thamesville to fill up, then headed towards Rondeau.  Some decent wintering birds have been in the area recently, including the annual Wilson's Snipe on Stefina, and a couple of Double-crested Cormorants at the 'Eau.

The snipe was barely visible in the pouring rain.  At Erieau, it was downright nasty, but I did see one cormorant on the rocks.  Both FOY. 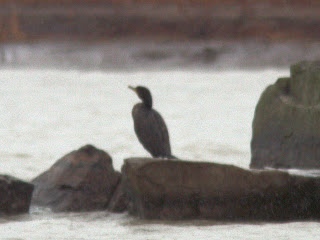 At one point, I caught sight of a White-winged Scoter in the channel, a FOY. 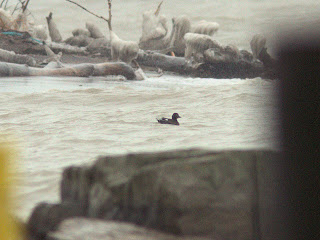 A male Canvasback was looking lonely in the Marina. 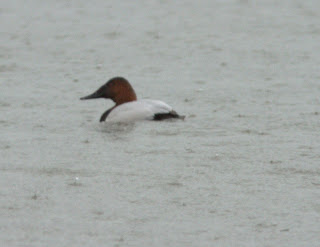 Today, the weather was a little better, but it did rain a bit as I headed down to Wheatley and Hillman Marsh.
Five Bonaparte's Gulls were FOY at the harbour.

Hillman Marsh turned out to be fairly interesting.  The sun even came out for a while, which was certainly a novelty for a Saturday.
I ended up seeing about six Great Blue Herons, FOY. 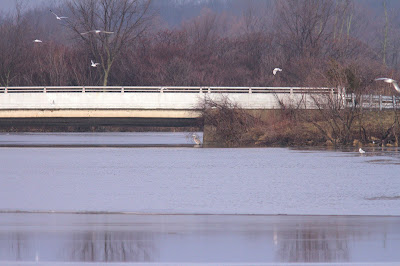 More bonies were around, totalling about 25. Lots of Ring-billed Gulls were around today. 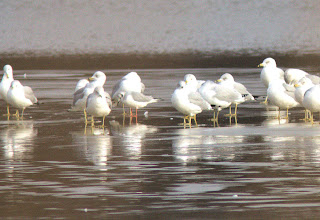 As I walked towards the shorebird cell, a Northern Shrike caught my eye...a FOY. 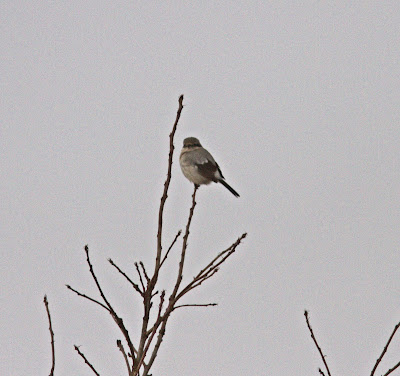 At the boardwalk, I managed to hear the Marsh Wren for a FOY.  One seems to be in this area each winter.  One cannot get close as the area is too flooded.

The main area of the marsh is totally open to the lake now.  There were lots of geese and gulls.  I half expected a white-fronted goose, but they were all regular Canadas.

Point Pelee park was open today, for the first time since the deer cull.  It was quite busy with people.
I walked Shuster Trail first thing.  Over 1000 Common Goldeneye were out on the lake.  So that is where they all are!

I did not have a scope on hand, so likely I missed a Barrow's.

While walking back the trail, an Amerian Pipit flew over, a FOY.
At the VC, a Common Grackle flew overhead, not a FOY.

I next headed to the Tip and met up with Jeremy Bensette.  There was not much activity, but a couple of White-winged Scoters flew by (SOY...lol).  Another single bonie flew by, so I suspect some have come in lately.

We headed to Sparrow Field, and along the way, a flock of kinglets and creepers was seen.  A single Ruby was among them, not a FOY,

Sparrow Field had a number of Northern Cardinals, and singing Song Sparrow.

Later, I checked Cactus Field and came across the only three Black-capped Chickadees of the day.

On the way home, I checked out Lighthouse Cove.  A number of gulls were way out on the lake.  The strange Mallard-type ducks were still around.  Some nice colour combinations!

Through Dover Township, there were well over 1000 Tundra Swans.

Mitchell's Bay revealed nothing of note. 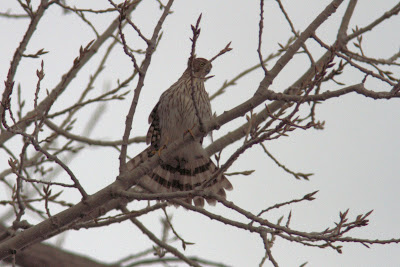 Prowls and Owls: Another Week in the Bag

There has not really been much to report lately, as known rarities or uncommon birds continue to be enjoyed by birders.  And, (I always have to comment!), the weather continues its usual pattern.  Just like clockwork, late last Sunday the skies cleared for a nice week of weather.  And, for the third weekend in a row, the weather is going in the dumps for the weekend.  Don't get me started....lol.

Last Sunday I stopped by Mitchell's Bay area and walked the south shore trail, and looked at the Bay in the village.  Some White-crowned Sparrows were a surprise near the parking lot of the trail. 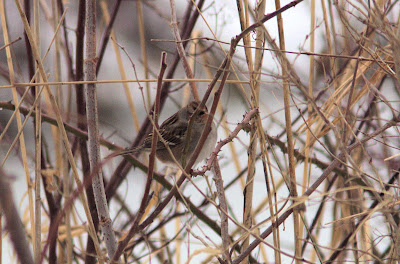 A few Red-winged Blackbirds flew by, so some are around here and there.

At the Bay, some Bald Eagles were frolicking on the ice. 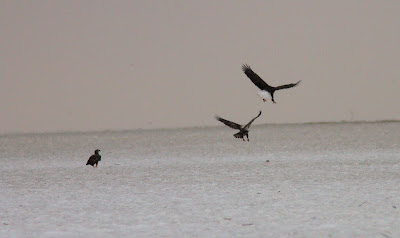 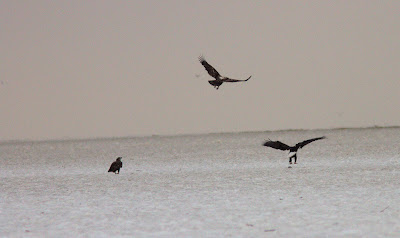 I continued driving around, and ended up at the St. Clair River.  I got a better look at one of the hybrid ducks at Sombra--the male Ring-necked X Redhead.  It was too tired to get its head up! 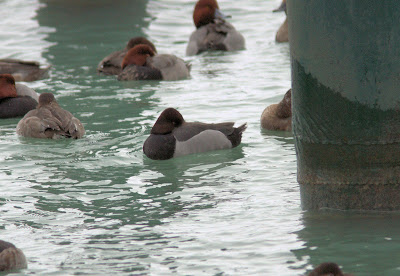 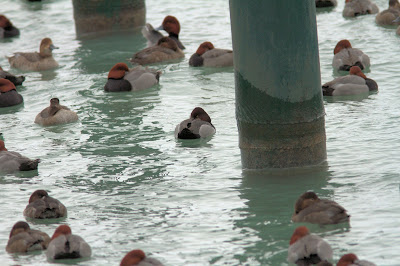 There is another hybrid there.  An apparent male Redhead X Lesser Scaup which I did not get a photo.  It is difficult to get good photos on a weekend due to the usual weather.

Gulls continue to be the story on the St. Clair River.  Several thousand are all along the river now, but no real rarities have turned up....yet.  I have observed lots at Port Lambton each morning.

There have been lots of Glaucous Gulls this winter.  I recall lots in 2013, as on 3 February that year, I counted over 60 from Sombra to the Suncor Dock at Sarnia. 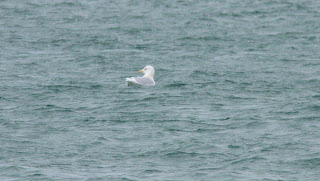 With the usual nice weekday weather, I have toured around in the evenings.  At least two Snowy Owls are along Langstaff Line now.
Wednesday evening, I observed a Short-eared Owl at the Sombra solar farm.  It seems only one is there currently.  Too bad I did not have a camera, as when I first saw it it was perched on a Stop sign!
Here is a photo from years ago at Sombra. 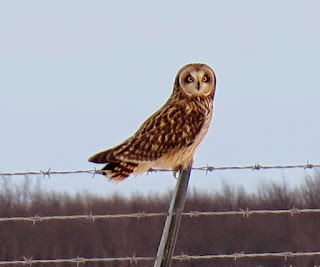 This evening, I ventured all the way to Sarnia.  Some Short-eared Owls are at the old Blackwell Landfill.  Paul Pratt, among others, were there to watch the three owls as well.  These seem annual here and at the adjacent solar farm. 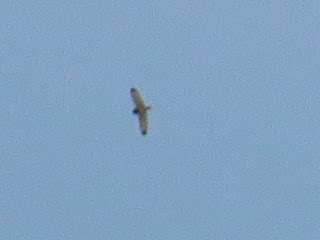 These owls are difficult to find in numbers anymore.  Paul mentioned that he remembers counting about 40 while he walked home from school! He used to live north of Sombra around Bickford.

On to another weekend and dealing with the weather.....